Adding Shelves to My Office

Enter your email below to receive exclusive life updates, sale finds, and product roundups from me! xx

Sharing all about the long weekend I shared with my best friends in Cashiers, NC & my favorite indoor games of ALL TIME. Read More

^ I chose this cozy snack board photo because this pretty much looks like what we ate all weekend. ????

I just got back from a long weekend in Cashiers, NC with my best friends from college. According to my research, (because I didn’t know until I went), Cashiers a little mountain town on the southern edge of the Blue Ridge Mountains and the easternmost front of the Appalachian Mountains.

One of our friends has a house there, (a gorgeous multi-level cabin that looked straight out out of the “after” part of a Chip & Joanna Gaines renovation… swoon), and we spent the three days of President’s Day weekend there. It was such a peaceful and serene spot that made for the perfect retreat from normal life.

Throughout the weekend we participated in the nearby outhouse skiing competition (you read that right), went on a three hour hike to spot all of the gorgeous waterfalls in the woods, roasted marshmallows outside on their fire pit, and basically spent the majority of our time cozied up inside playing games.

Time spent with my whole group of friends from college is rare (we’re usually able to all get together a few times a year) and I appreciate it more than I ever have before. We aren’t quite as wild as we were in college (I don’t wear nearly as much body glitter… ????) and we’ve definitely settled into more game nights (though with plenty of drinks????) instead of going out as often.

Therefore, our weekend retreat looked like hours cozied up inside and cracking ourselves up SO MUCH while playing many of the games I listed below. Besides for card games, I would say that these are our favorites to play! So I thought I’d share the fun and recommend them to all of you! xx

Exploding Kittens is a Littleson family FAVORITE. We actually didn’t end up playing this over the weekend, but I had to include it because I would say that it’s the most hysterical game that we play when we’re together. It’s a card game that’s been called a “highly strategic kitty-powered version of Russian roulette” and is full of strategy, alliances, and luck of the draw! We’ve played this with my little cousins before too (who were in middle school at the time). So it’s definitely fair game for the whole fam, and you can always play with partners as well. I read that it’s sold 8 million copies, which broke records in the game industry, and has also received many “game of the year” awards!

I especially love Fishbowl for how easy it is to put together. All you need are a few pieces of paper, a pen, and some type of bowl (here’s a under $5 plastic bowl if you want to get official ????). It’s kind of like an updated, more intense version of charades, but still retains all of the reasons why charades is such a classic and beloved game. It can also be as raunchy as you want to make it, depending on the words that you write down on the slips of paper!

We played Jenga in between other games (because it took a less amount of time). It’s always hysterical to see how everyone handles the pressure of pulling out a block without toppling over the whole tower. The one that was at my friend’s house was the large sized Jenga set and was the perfect size for a coffee table that everyone gathers around! They also had their guests sign the blocks with their names or inside jokes from their stay, which I thought was the cutest idea! 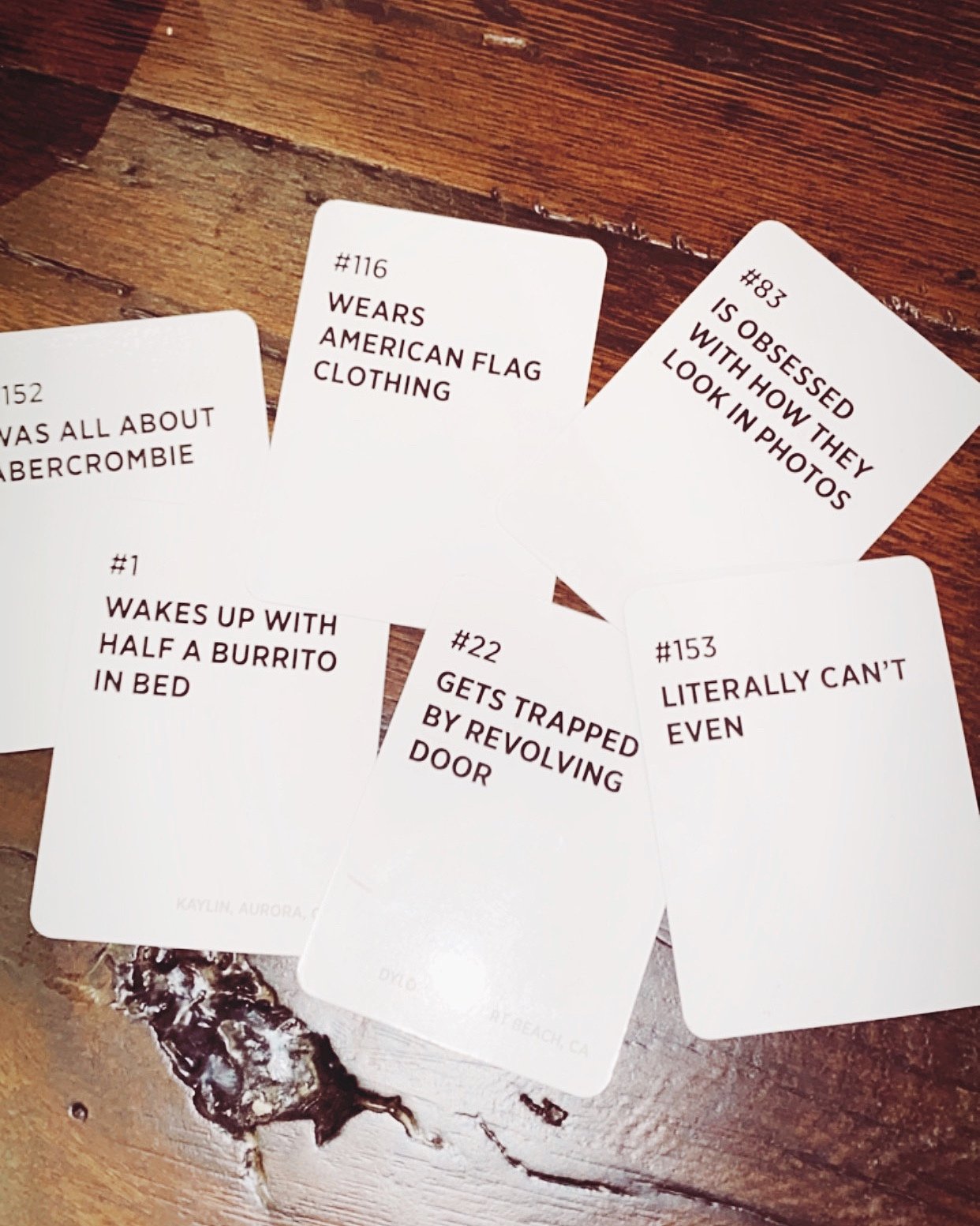 If you really want to know what everyone thinks about you, then play Who’s Most Likely To ????. I shared it on my stories over the weekend (see the above photo of the cards that everyone voted were “me” omg…) and received so many questions about it! It’s a hysterical way to pinpoint the person in the group who is the “most likely to” do just about anything.

Rummikub is a Debra Littleson favorite… so you know it’s a good one! She taught me how to play and is fiercely competitive in it! It’s a great numbers game, but is VERY simple. So even if you’re mathematically challenged (ehem: me), it’s easy to follow and pick up on the strategy that goes into it. It’s the kind of game that you need to play a practice round to fully understand, and then you will completely get it. After playing a lot this past weekend, I will definitely be purchasing it to have in our apartment now!

Telestrations After Dark is the dirty (ok, very dirty) version of Pictionary meets Telephone (the PG version is called Telestrations). You basically get a word that you have to draw on an erase board notepad. Then, pass your notepad around so that everyone has to draw what the word means. Someone has to guess the word from the new drawing, etc., until you wind up with your original notepad. You then go through and see how your original word changed as people kept re-drawing it and guessing! We were absolutely howling at this one. ????HIGHLY recommend.

What Do You Meme

Similar to Most Likely To, What Do You Meme is a card game where everyone pairs a meme with what they think is the most accurate or hysterical caption. The person who picks the meme votes on the most accurate caption for it it, and whoever shared that caption wins! It’s even more hilarious when you create your own caption cards too.

Up next: Travel Guide: Philadelphia